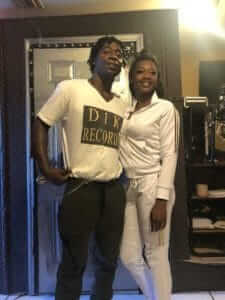 Recently I took a trip to Sebring, Florida, also known as “The City on the Circle”. Despite living in Florida for many years, I had only heard of Sebring, but never actually visited this town. I’m sure as with anyone traveling to a new town, there was a little anxiety simply because I was traveling not only into unfamiliar territory, but into the lives of a closely knit family. Not a traditional family, but a family none the less. When I was contacted by someone in the music industry, and basically told about this record label that had some unbelievable artist that I just had to meet. At first I have to admit, I was skeptical, I’m sure you can imagine how many times I hear how good this artist and that artist is. This time was different, something in my gut told me, “you need to get down there and see what’s really going on.” So off I went to meet D1K Records. The CEO of the label, Drop was at the Orlando airport with his lovely girlfriend, Krystal as well as Ray, the gentlemen who had initiated the meeting. They picked me up and we made the two-hour trek to Sebring. Drop took us around and showed us his club Blue Haven which is still under construction after being damaged from Irma. He explained his plans for this club, which is a platform for the artist of his own label as well as other upcoming artist would have a spot to perform. Afterwards they took us to Baghdad Studios, which was created by Drop to ensure that his artist had a safe place to lay down their tracks. I can honestly say that I have never met a more humble group of artist in my career. They really made me feel welcome and part of their family, I truly felt honored to be there among such talented artist and of course their mentor, Drop. This is one label that you definitely want to keep an eye out for as they make their way on to the scene. I call them My Hidden Treasure! Rest assured D1K Records is about to make some major moves in the industry and I thank God that I get to be a part of it! You definitely won’t forget D1K Records once you hear their music, but even more importantly, once you learn that this is about so much more than just the hits they have coming. I would like to send a personal shout out and thank you to all of the artist at D1K Records and Baghdad Studios for your hospitality and allowing me to be a part of something so much bigger! One Love Drop and Krystal, we will see you again soon!