on The Come-Up Blog Post - MilliUp!dotcom! Your SEO optimized title

Truth! Separate the weak from the obsolete! 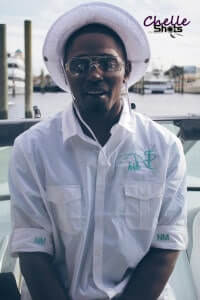 September 1999 Wilmington, North Carolina, Carolina George was a freshman at Lakeside High and introduced to the microphone for the first time in his life. Like any young aspiring artist of the hip-hop craft, after his firist rhyme and rap he secretly envisioned becoming the next big rap superstar but the reality of landing a record deal seemed another lifetime away.

As beautiful as Wilmington aka “The Port City” is, its always been the kind of place for which the saying, “crabs in a bucket” is pretty fitting. Let’s just say that there aren’t enough positive things in the black community to grab the attention of the people, especially back in 98′ when “staying alive under 25” and out of trouble, was not an easy task.

With positive options especially for the youth in short supply, Carolina George found himself in the center of a city full of hopes and dreams with no realistic ways to achieve even the shortest term goals that didn’t involve the criminal elements. After enough mistakes on his part Carolina George’s mother felt that the only way that her children would be able to have a realistic shot at success would be to leave the city so she relocated to Greensboro, NC. A few months and a few more bad decisions later Carolina George followed.

Carolina George’s mother asked him to repay her for the sacrifices she’d made for him and his two brothers by graduating from high school, he felt that was a fair enough deal considering his options and possible outcomes. During this time in his life he forgot about the inspiration of the art of hip-hop but listening to the words of the late great 2Pac Shakur kept Carolina George  motivated to achieve the promise to his mother.

In spring of 2001 Carolina George  became one of the very few people of his immediate family to graduate high school. He didn’t stop there, Carolina George gave his mother the great pleasure of seeing her son attend North Carolina A&T State University in Greensboro, NC to take his education even further on his own.

It was at NC A&T SU that Carolina George then known as “G Smooth” linked up with his childhood friends from Wilmington, NC again and started rhyming for parties and on tapes. They would eventually form the “next hip-hop super group” Mandown International Productions or MIP. Delivering lyrical excellence on top of magnificent heartfelt beats generated raw emotion from the bands music that turned them into “The nail that stuck out” not only in the Greensboro area but after Starfleet DJs rated the groups hit single “Take ya Durag off” top 10 in download sales they were officially front runners for the entire state of North Carolina as far as the eastern hip-hop scene is concerned. ATL hip-hop artist Rocco dropped in on a recording session at Patchwerk Studios and simply gave the group a few positive words on their direction as assurance that things were heading in the right direction. As time went on and the troubles of life followed, MIP was unable to maintain or elevate the status quo, instead the group dismembered after a few years.

What followed was the definition of resilience, character, and hustle. Carolina George, then still known as “G Smooth” was without a producer to generate his signature sound, had no label to back his music once and if it was ever generated, and all in all was on his own and running out of time to be successful in his eyes. Then came the first obstacle, not wanting to bother with any producers because of paperwork and the lack of funds Carolina George taught himself how to produce his own beats using FL9 a digital production platform. Second,  Carolina George didn’t have the funds to record every song and get them professionally mixed then mastered so he taught himself how to record as well using Sonar a digital audio recording platform. Finally, G Smooth needed to reinvent his entire look, brand, and business so he thinks for hours what will he be able to do about this issue? On that night, born George Travanti Waters, G Smooth decided that he was to from that point on be known as Carolina George in honor of the two-state region that made his life and lifestyle what it ultimately is… honored. Carolina George decided that his music would be heard and felt in a fashion that would be unique as well as meaningful and after a night sipping and smoking as many may  or may not do to reach the creative gene  he came up with the business name “MilliUp!” as the name of his new business that would ultimately carry out his bidding.

Refusing to “break or give way under pressure”(weak), and understanding that in the current age of Carolina hip-hop his music and sound was “no longer being produced or used” (obsolete) Carolina George decided that “MilliUp!” (Get your milliins up) A new refreshing and unique sound of music was his way back to relevancy, back to dominance!

Fast forward to the final product of his ambition and you have the public makings of an empire! MilliUp LLC is now producing music that is being played on over 5000 radio stations worldwide! Every media and social media platform is very well written about in high regard, organized, and professionally put together. Carolina George has helped unite the North and South Carolina hip-hop scene by joining the “1Carolina” movement. “Its one thing to be weak or unable, but its an entirely different feeling to be obsolete or irrelevant”, when  asked what drives his ambition Carolina George responded, “being relevant, giving my life purpose”.

But perhaps even more importantly than all of that, it’s YOU, the listener, that makes all of it matter. We look forward to many more sometimes hard, sometimes ugly, always worth while experiences along this musical journey. Here’s to you being part of that journey.

If you’d like to hear the most recent milestone of that journey, click hear to listen to some of this MilliUp! music. Thank you for being a listener and for making it all matter.

#TRUTH separate the weak from the obsolete! #MilliUp “Where opportunity meets ambition!”