Imagine finally finding the love of your life only to be ripped apart from them devastatingly at your own personal request. Now why would anyone do that you may ask? The answer is anger. Sometimes we make irrational decisions when we are angry. Many times those decisions are often unrepairable and we are left to live with the dreadfulness of our mistakes the rest of our lives.

A Christmas Proposal is a story of a man trying to rectify a huge mistake he made in the heat of an argument, one that he will do anything to repair so that he can be with the person he loves more than anything in life.

But as we all know there is a villain, someone who doesn’t want to see his mistake made right, someone who realizes they also can’t live with out this person in their life and they are ready to put up a huge fight.

The main character played by Joshua T Shipman, has a cousin played by Josiah Bennetone, that he confides in (dressed in our own MilliUp Apparel btw) and asks for advice which is anything but to simply tell the truth to co star Lily Nicole‘s character. He just can’t find it in his spirit to trust his instinct, come clean & take whatever fate the universe provides. That would be too easy, there has to be another way, well in this case 5 more ways to attempt to make a horrible wrong right. So the advice of his cousin appears to be his only way to turn back time.

A Christmas Proposal is a beautiful, suspenseful, cinematic holiday movie filled with a roller coaster of emotions that bring tears one minute and Santa belly laughs the next. It’s the “What was this director thinking, this is hilarious when it shouldn’t be” for me. We all love when the characters capture your trust and spirit. This film will have you on the edge of your seats filled with a cast that is sure to win your hearts. Grab your blankets, warm coco, and Buckle up, because Santa’s sleigh has nothing on the emotional roller coaster of this amazing film “A Christmas Proposal.” by Nakia T Hamilton! This is definitley a holiday movie to watch every season! 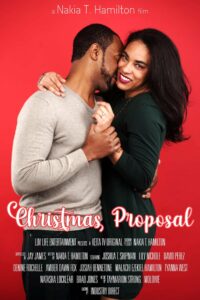 Refer to the movie at these links: